Family drama abounds in the The Lion In Winter, in which King Henry II and his estranged wife, Eleanor of Aquitaine spar over which of their sons will inherit the English throne. The Lion in Winter was first a 1966 play written by James Goldman. The play debuted on Broadway to generally negative reviews. Nevertheless, Goldman adapted the play for the big screen. Starring Peter O’Toole as Henry and Katherine Hepburn as Eleanor, the 1968 film was a surprise smash hit. Goldman won the Academy Award for Best Adapted Screenplay and Best Actress, and the film raked over twenty million at the box office.

Taking place in Chinon (France) over Christmas in the year 1183, the film kicks off with the arrival of Eleanor as the family prepares to celebrate the holiday. Henry has decided to name John as his successor, but Eleanor favors their eldest son Richard. Also joining the family at Chinon is Philip II, the newly-crowned King of France. He demands that Richard be married to his sister, Alais, who is Henry’s mistress, or Henry must give back Alais’ dowry. Henry offers to make Richard his successor and marry him off to Alais, in exchange for control of the Aquitaine, which he plans on giving to John. When Eleanor resists, he offers her the one thing she desires more than anything: her freedom. John, believing his father has betrayed him, begins plotting with Geoffrey and Philip to start a war against him. Richard then comes to Philip to ask for his support, and the two are revealed to be former lovers. When Henry’s sons’ betrayals are revealed he finally understands that none of his sons are suited for the throne. Henry locks his boys in the cellar and makes plans to travel to Rome to get the Pope to annul his marriage. He plans on producing an heir with Alais, but she tells him that his sons would never let that happen, and that he must kill them. When the King arrives to execute them, he manages to best them in a fight, but cannot bring himself to kill them. Instead, he allows them to escape. He and Eleanor share a tender moment of understanding, and the next day she gets on her boat to go back to prison.

While concrete details about the inner lives of these historical figures may elude us, Goldman’s work paints a fascinating picture, specifically Eleanor of Aquitaine. While aristocratic women in the medieval period may have enjoyed little freedom or autonomy compared to their male counterparts, Eleanor was a different case altogether. As such, her portrayal in the film stands in stark contrast to that of other female characters in films set in the Middle Ages. Eleanor of Aquitaine was born in 1122. Through her father she inherited the largest duchy in France, the Aquitaine, which stretched from Poitou to the Pyrenees. In 1137, she married Louis VII of France. They were married for 15 years, during which she went with him on a Crusade to serve as the feudal lord of the Aquitaine. While she was admired by many, Louis divorced her because she failed to produce any sons. A few weeks after her divorce she married the nineteen-year-old Henry of Anjou, who was later crowned King Henry II. She bore Henry five sons, including Richard, Geoffrey, and John, as well as three daughters. In 1173, her sons rebelled against her husband when the subject of succession was brought to the table. It has been speculated that Eleanor may have instigated the war because of her anger towards her husband's many infidelities, specifically his relationship with Rosamund Clifford, his most favored mistress. The rebellion ultimately failed, and Eleanor was captured and imprisoned until Henry’s death in 1189. It’s in the period of Eleanor’s imprisonment that The Lion in Winter begins.

The 2003 television remake of The Lion in Winter was directed by Andrei Konchalovsky and starred Glenn Close and Patrick Stewart. It premiered on Showtime Network and Hallmark Entertainment over the course of two nights. Generally, the film was well-received critically, with Close’s performance in particular being praised. The film won an Emmy Award for Outstanding Costumes – Miniseries, Movie, or Special, and Close won a Golden Globe and a SAG Award for Outstanding Female Actor - Television Movie or Miniseries. The film holds a 7.2/10 rating on IMDb, in comparison to the original’s 8.2/10 rating.

The most resounding criticism came from the fact that it simply was not the original. Stewart and Close delivered marvelous performances, but they were consistently in the shadows of O’Toole and Hepburn. Stewart in particular was criticized for not getting as impassioned or gruff as O’Toole in the role of King Henry. Worth noting, however, is the addition of a prologue scene that shows the end of the Eleanor’s revolt as well as her imprisonment. This gives the TV remake a more cinematic quality to it. Furthermore, it adds a certain depth to Eleanor’s character as a respected warrior and noblewoman, as all the guards bow to her when she’s escorted to jail. This, when juxtaposed with Katherine Hepburn’s entrance, adds a certain gravitas to the character.  The script itself contains several historical inaccuracies. Henry did not have Christmas at Chinon in 1183. While there are rumors that Richard the Lionheart did have sexual relations with men, there’s little evidence that he had any sort of relationship with Philip. Alais did live with the royal family, but there is little historical evidence that she was Henry’s mistress. Finally, the dialogue itself contains several anachronisms. On the subject of historical accuracy, however, James Goldman said, "The Lion In Winter is only apparently historical . . . it is a comedy but not the kind we're used to seeing . . . it wants to be a vision of the world with tears but without tragedy, with passion, pain and funny things all caught in bright clear comic light." While the film may be historically inaccurate, Goldman was attempting to capture the essence of the family dynamic between Henry, Eleanor, and their three sons. 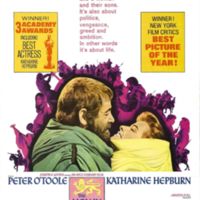