Ironclad (2011) tells the story of the siege of Rochester Castle by King John in 1215. King John, played by the dependable character actor Paul Giamatti, furious from his failed wars in France and being forced to sign the Magna Carta by a group of rebellious Barons, is out for blood. His path to revenge begins by hiring the first Dolph Lundgren look-alike he can find (Vladimir Kulich) to lead an army of Danish mercenaries to reassert his authority in England. The only thing that can stop him is the valiant Knight Templar Thomas Marshall played by Gerard Butler knock-off James Purefoy, and the forbidden love of Kate Mara’s Lady Isabel. After a truly large number of limbs are chopped off, lots of Paul Giamatti yelling while wearing a silly hat, and more eating of horses than anyone is comfortable with, Marshall is able to hold off John and the Danes just long enough for Prince Louis of France to arrive and save the day.

All of this bravery would not be enough to save Ironclad from both critical and box office failure. The movie was met with a less than enthusiastic critical reception, receiving only a 41% on Rotten Tomatoes and a 42% from MetaCritic. At the box office it managed to gross only $5.2 million worldwide on a $25 million production cost. In spite of these things, Ironcladhas gone on to establish a semi-cult following among fans of medieval war films. It was likely for this reason that a sequel was made three years later..

Ironclad boasts a multitude of factual inaccuracies, ranging from relatively minuscule to downright unavoidable. While even the most nitpicky historians are willing to admit that some number of factual inaccuracies are necessary to properly tell a story, it’s hard to advocate for the choices made in Ironcladas being anything other than for pure dramatic effect, with no regard for true historical accuracy. The most glaring example of this is when writer director Jonathan English decided that the Siege of Rochester would end with the arrival of the French and the defeat of King John when in reality John successfully captured Rochester, and the French arrived six months later. In fact, the Siege of Rochester marks one of John’s most successful military engagements. The movie would have you believe that the delusional king was so incompetent that he was unable to siege a castle guarded by four men. Not only was he successful in his capture of Rochester Castle, he did it while overcoming a force of nearly 95 knights. These changes do not represent a good faith attempt to convey the true spirit of the story so much as it represents a writer-director’s complete disregard for the truth in an attempt to make a more interesting movie.

Ironclad draws on a rich tradition of portraying King drawn as a classic villain. King John’s reign was marked by the forfeiture of lands in France, a brutal uprising among his barons, and the beginning of the limiting the power of the monarchy in England. John, often referred to as John Lackland because the loss of land that occurred during his reign, was never popular and is often categorized among the least successful kings English history. This, coupled with his excommunication from the church by the Pope, and his supposed (though perhaps embarrassing) death from food poisoning all contributed to the portrayal of him as a bumbling fool.

One of the most prominent historical sources for negative portrayals of King John is William Shakespeare’s King John, which was written in the 1590s. Shakespeare’s depiction of King John as a tyrant king has great influence in popular culture; the play shows him as a tragic character. A deeper dive into the context in which Shakespeare wrote this play gives a better understanding of why John was portrayed the way he was. In the sixteenth century English theater was one of the most popular forms of entertainment for many. Theater companies all served the Crown, and were required communicate a type of support for the monarchy. Through that lens it is obvious that Shakespeare’s King Johnstresses the importance of loyalty to the crown over rebellion against tyrannical monarchs. Interestingly, Shakespeare’s King John stands in stark contrast to Ironclad’s King John. The film has little to say about the politics of medieval England and is nothing more than a glorification of gory violence and warfare. 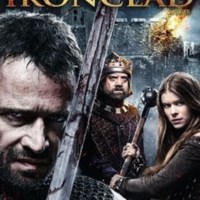