Robin Hood: Men in Tights at its simplest is a low-brow comedy attempting to parody the Robin Hood tales, mostly focusing on the two popular films The Adventures of Robin Hood (1938) and Robin Hood: Prince of Thieves (1991). Frequent criticisms of this film were that director Mel Brooks reached a low point in using his type of comedy after making these kinds of films for years and that the film ultimately fell short of its goals. As a parody, Men in Tights follows the same basic script as other Robin Hood films. Robin (Cary Elwes) returns to England from Crusade, and sees injustice. Robin quickly learns that these injustices are the result of the villainous Prince John (Richard Lewis) and the aptly named Sheriff of Rottingham (Roger Rees). After assembling a team of merry men, Robin begins to fight these injustices and, without difficulty, woos the beautiful Marian (Amy Yasbeck). In classic Robin Hood fashion the witty hero ultimately saves Marian, marries her, and is knighted by the conveniently returning King Richard (Patrick Stewart).

Robin Hood: Men in Tights mainly uses the tropes of previous movies for its source of comedy. Upon making his grand entrance at Prince John’s dinner (mirroring a similar scene in The Adventures of Robin Hood), Robin comments how “unlike some Robin Hoods, I can speak with an English accent” and then proceeds to stare directly into the camera, shattering the fourth wall, referencing, of course, Kevin Costner’s critically derided attempts at an English accent. The film uses this technique on several occasions. These comedic elements aren’t just employed as a means of jesting about the other Robin Hood films. These elements go farther to bring about another large aspect of Robin Hood stories since the beginning of the ballads. The Robin Hood stories all have one common theme of pointing out the injustices in society, sometimes very blatantly. The clearest example of this is when Robin first arrives in England and seeks out Achoo (Dave Chapelle), a character based on Morgan Freeman’s Azeem in Robin Hood: Prince of Thieves. Achoo is being attacked by some of the Sheriff’s men and shouts “Man I hope somebody is getting a video of this thing.” This is a reference to what had been at the time the recent incident involving Rodney King, whose brutal assault at the hands of Los Angeles police officers was caught on tape. By slipping this line in Brooks comments on social injustice like the old Robin Hood tales did, but draws attention to it using low-brow humor.

When looking at Robin Hood: Men in Tights as a comedy, one can also look past the comedy momentarily and observe the ways that the women are portrayed within the film. Most of the humor reduces most of the characters to a stereotype. In the case of Marian, she wears (the historically inaccurate) chastity belt, which seeks to comment on Brooks’ ideas about how medieval women were treated. But the main group of women in the film, even Marian, all play active roles in choosing whom they marry. Marian specifically does what she can to avoid an arranged marriage and marry for love. This is a common theme found in other cinematic versions of the tale, such as the 1938 film. Marian in Men in Tights, however, seems to differ from the more empowered Marian found in the ballads, such as Robin Hood and Maid Marian. While other versions of Marian had other interests besides Robin Hood, this film presents a very Robin-centric Marian. Even though humor is what Brooks had as a goal for his film, he does seem to downplay the role of women, contrary to recent trends in Robin Hood cinema that have re-interpreted the Marian character to be more empowered. 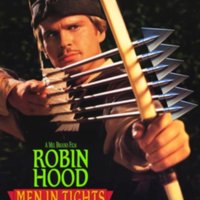