Robin Hood: Prince of Thieves, released in 1991 and directed by Kevin Reynolds, was a box office hit generating nearly $400 million worldwide and about $165 million domestically. The film, not overly concerned with staying faithful to the Robin Hood legends or to history in general, attracted a wide audience though did little to contribute to the genre of “medieval” film, as historians Stephen Knight and Scott Allen Nollen have noted.

The cast is comprised of Kevin Costner, as Robin of Loxley; Morgan Freeman, as Azeem; Alan Rickman, as the Sheriff of Nottingham; Christian Slater, as Will Scarlett; and Mary Elizabeth Mastrantonio, as Marian. The story is mostly set in Nottinghamshire, England where the Loxley family estate is located. At the start of the film Robin and Azeem are being held in a prison in Jerusalem. Robin was a crusader and was captured by the Muslims, who were protecting their homeland. They return to England, realize the ruin of the Loxley estate and realize the Sheriff of Nottingham has killed Robin’s father. From there they join with outlaws Will Scarlett and Little John who have inhabited Sherwood Forrest. They band together and start a campaign against the evil Sheriff of Nottingham. In the end, Robin and his Merry Men defeat the Sheriff and his henchmen.

The film did not receive much critical acclaim, receiving a 49% score on Rotten Tomatoes and a 51% score on Metacritic. Roger Ebert called it “a murky, unfocused, violent, and depressing telling of the classic story.” A reason for this criticism was the poor storytelling and the poor characterization of these classic characters. In fact, the writers did not draw from the ballads or even the classic film The Adventures of Robin Hood (1938), but rather from a TV series that ran from 1984 to 1986 called Robin of Sherwood. One major element adapted from the TV show was the character of Azeem, who on the show and was called Nazir. Terry Walsh, the stunts coordinator from the show, claimed it was copyright infringement to have a character called by Nazir in Prince of Thieves. The writers of Prince of Thieves incorrectly thought this character was part of the Robin Hood mythology, but he had only appeared in the series Robin of Sherwood! This is just one of many examples illustrating that the filmmakers of Prince of Thieves did not do adequate research. Other evidence of non-medieval inspirations for the film included its title, which was taken from the novel by Alexandre Dumas called Robin Hood Le Proscrit, written in 1863.According to historian Nollen, the cast also had little knowledge of prior Robin Hood films and they were mainly basing their performances on the show as well.

The initial tone for the film was intended to be “realistic,” and different from the prior films. The production designer would only allow animals that were known to have roamed in medieval England in the film. Also, the weapons designer worked hard to produce weapons that were accurate to the period, however the cast and script fall devastatingly short of this standard. The cast was mostly miscast, especially Kevin Costner, and it is a wonder that American actors were cast for these roles, given that the filmmakers were attempting a “realistic” take on Robin Hood.

Nollen also believed that Rickman’s overacting did not complement Costner’s performance, and that a more subtle villain would have worked better. The overarching problem, however, is the film’s formulaic writing, in what Nollen calls the “post-Star Wars era” of action-adventure films. The writing takes no risks and emphasizes the violence onscreen at the expense of the characters. Knight has pointed out that this film emphasizes Robin’s family as a motivator above caring for the poor, a theme which went against the classic themes of social injustice in earlier films like Adventures of Robin Hoodand the ballad literature.

Overall, Prince of Thieves fails to innovate or offer fresh ideas for the Robin Hood genre because of its poor performances and writing, though it was a box office juggernaut when it was released. Time has not been good to Prince of Thieves. 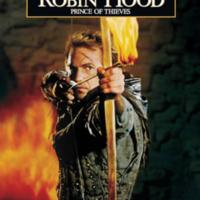