A small medieval convent is the residence of three troublesome nuns, spoiled Alessandra, wild Fernanda, and timid Ginevra. Their lives are quickly thrown into turmoil when the new, supposedly mute and deaf, gardener Massetto joins the convent.

The Little Hours (2017) could easily be described as the deranged love child of medieval literature and modern-day comedy. The film was directed by Jeff Baena and features famous comedians such as Nick Offerman, Aubrey Plaza, Dave Franco, Kate Micucci, Alison Brie, Fred Armisen, and many more. The film’s storyline is based on Giovanni Boccaccio’s The Decameron, which was written in the fourteenth century. Specifically, the film pulls from the first and second stories of third day in The Decameron. The first story is about Massetto (Dave Franco) who comes to a convent pretending to be a deaf-mute gardener, so he may, “till [their] hortyard as it was never tilled yet” (Boccaccio, 172). This plan backfires, as Massetto soon finds himself in over his head when all the nuns and the Abbess take advantage of his perceived muteness to engage in carnal relations. Eventually Massetto and the nuns come to a compromise. Together they create aschedule for their sexual escapades, and he is able to live and be cared for at the convent. The second story plays a less prominent role in The Little Hours storyline. This one revolves around Massetto, before his arrival at the convent, and his illicit relationship with the wife of his Lord. His Lord(Nick Offerman) finds out and attempts to identify the servant sleeping with his wife. Overall, The Little Hours, through an adaptation of The Decameron, examines the differences between male and female sexuality, and the way that sexuality is used to claim agency over their own lives.

The relationship between the nuns and the supposedly deaf and mute Massetto paints a contrasting picture of assertive femalesexualityand passive male sexuality. The three main nuns, Alessandra (Alison Brie), Fernanda (Aubrey Plaza), and Ginevra (Kate Micucci), have differentreasons and motivations for why they each seeksexual pleasure, but all three actively seek that satisfaction. Thethree nunspursue either Mateo or other nuns to engage in carnal escapades. When he arrives at the convent, Massetto is sexually passive. While he may be surrounded by young and sexually available nuns, he, in a sense, “loses” his voice when he is unable to pursue them, given that the nuns pursue him first and then seduce him. In his book on The Decameron, David Wallace pointed out that “[w]hen female protagonists cannot communicate through language they are seen as weak and vulnerable. But, Massetto grows more powerful by taking on deafness and silence” (Wallace, 42). Massetto may be passive, but he is still in a position to profit from his “misfortune.” This is especially apparent in The Little Hours when his character, in the role of the servant from the second story, has full use of his voice but is in a weaker position given that he is at the mercy of his Lord and the sexual attention of the Lord’s wife. The Little Hours depicts the key male characters from The Decameron as being sexually passive; Massetteo’s sexual experiences are something that happens to him, not something that he necessarily makes an effort to engage. Instead, Massetto allows room for the women to dictate his experiences.

The three nuns, unlike Massetto, have better control over their sexuality even though they are literally cloistered and supposed to be cut off from the world of pleasure. While the women are more active they do face obstacles. The obstacles they find most cumbersome have less to do with personal reservations and more to do with timing and space. Alessandra has sex in front of an oblivious elderly nun, Ginevra accidently gets high on drugs, and Fernanda resorts to kidnapping, all in the pursuit of intercourse with Massetto. It should be noted that, in The Decameron, the story of the convent is narrated by a man;as Marilyn Migiel, in A Rhetoric of the Decameron, points out,when men dictate the storyline, women often engage in sexual activity posthaste. As a result, the obstacles these women experience are often“external” or “logistical” (Migiel, 72). The women of the film and in the literature seem less concerned with if they should have sex, and more concerned with how they should have sex.Ginevra stands apart in this respect. She most likely represents the nun from The Decameron who states, “What is this thou sayest? Knowest thou not that we have promised our virginity to God?” (Boccaccio, 173). In the primary textanother nun, who argues that people break promises to God all the time, quickly dismisses her concern. The viewers see something similar play out in The Little Hours. Ginevra, especially, seems to have reservations about breaking her covenant with God, even though her anxiety then is played for ironic laughs when it is later revealed she is not even a baptized Christian. Ginevra at various points engages in both heterosexual and homosexual relations, and even practices witchcraft, along with the other nuns. Ginevra overcomes her moral dilemmas much as Alessandra and Fernanda overcome their logistical ones.

The Little Hours succeeds just as much as the narrator of The Decameron did in diminishing the belief that, just because a woman takes a vow of chastity, she is suddenly without any sexual desire. Giuseppe Mazzotta, in The World at Play in Boccaccio’s Decameron, arguesthat the narrator in The Decameron is attempting to highlight the misconception that “a nun by taking a vow of chastity has renounced their sexual appetite” (Mazzotta, 111). All the women in The Little Hourstake active roles in their sexual escapades. Though their methods could be construed as constituting “unruly” female sexuality, especially when coupled with homosexuality and witchcraft, that perception does not diminish their ability and willingness to take control over their own lives. One review of the film even pointed out that “the film seems in sympathy with the women’s disorderly passion” (Ruff, 3). The women of the film have power over their lives through sexual means in spite of any moral or logistical obstacles placed in their way.

The Little Hours was successful in modernizing both the storyline of The Decameron and the themes and lessons of the original medieval work. The film adapted a series of stories with humorous, though old-fashioned, themes as a raunchy story more accessible to the comedic tastes of modern audiences. The addition of f-bomb dropping nuns and drunken, exasperated priests stays true to the overall spirit of Boccaccio’s The Decameron. Overall, the message remains: we should not underestimate the power of lust and the role it plays in everyone's life.

Migiel, Marilyn.  A Rhetoric of The Decameron. Toronto: University of Toronto Press, 1954.

The Little Hours opens with what seems to be a peaceful and pious nun leading a lost donkey through a serene wilderness back to her abbey. Yet, not even five minutes in, the idea that this is going to be a film depicting the day-to-day lives of…

The filmmakers behind The Little Hours (2017) drew inspiration from The Decameronby Giovanni Boccaccio; specifically, stories one and two told on the third day. The Decameron was written in the mid-fourteenth century and focuses on a group of ten… 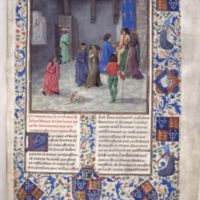 Woodcut image of the narrators in The Decameron, from a c. 1492 Italian edition 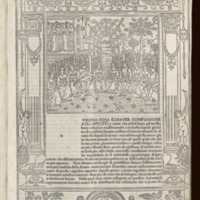 This edition of The Decameron (c.1492) shows an illustration of the ten narrators of the stories included in the book, told over the course of ten days. The narrators include seven women and their three male companions. The ten are seated in what…
View all 4 items