Joan of Arc
Politics and Warfare
Women and Power

Cecil B. DeMille’s first feature-length epic is an exercise in equivocation. Joan the Woman (1916) attempts to tell the story of a woman whose chosen path in life is inherently defiant of the gender norms of both her time and that of the film’s audience, while at the same time using the Maid of Orleans to reinforce the value of feminine-patriotic virtues. Joan the Woman follows the popular story of Joan of Arc, portrayed here by Geraldine Ferrar, from her departure from Domremy to her arrival at the court of Charles VII of France, where she convinces the dauphin to put her at the head of an army to oust the English from France. Her subsequent victory at Orleans comprises roughly twenty minutes of the two-and-a-half hour film. After Charles’s coronation at Reims, however, the film departs from the documented history dramatically. Joan is captured at Compiegne only because of the betrayal of her English suitor, Eric Trent. The Maid’s fictional love interest attempts to redeem himself through a daring rescue, but ultimately fails. Joan is led to her inevitable death at the stake in Rouen. Watching her burn, Trent laments, “We have killed a saint!” and the villainous Cauchon is led away in disgust before she is dead.

Framing this version of Joan’s story is a prologue and epilogue that takes place in the trenches of World War I in France. English soldiers keep watch over the parapets for any signs of a German attack, though as the audience is introduced to the story all is fairly quiet. Here, Eric Trent has supposedly been reincarnated as an English officer. In the dugout, he pulls an ancient sword from the wall and wonders “what queer old chap” once carried it into battle. Moments later, the armored apparition of Joan of Arc appears behind him to inform him that the time has come to expiate his sins against her. After Joan’s story is told, Trent goes on a suicide mission to destroy a German trench. His mission is a success, and as he lays dying Joan once more appears and all is seemingly forgiven.

While the film was met with generally positive reviews, it was a box office disappointment. DeMille had a $300,000 budget, partially as a result of the success of D.W. Griffith’s The Birth of a Nation (1915). Griffith’s film, which was an expensive but epic story, grossed at least $20 million. The Birth of a Nation emboldened fledgling studios to invest great amounts of capital into large film productions; audiences were willing to sit through multi-hour historical epics.Joan, bringing in only $600,000, was an unexpected failure. Critical assessment generally praised DeMille’s innovative use of lighting, novel intertitles such as raised text, and the new Handschiegl color process, which allowed for the striking use of colors against an otherwise monochrome palette. Joan’s paltry box office take, however, was indicative of its failure to resonate with a large audience, particularly the lower-middle classes, who found no characters with whom they could relate despite Joan’s humble beginnings. The film seemingly appealed to mostly those of the upper or middle classes.

It is these people who were likely well-versed in Joan’s history, though perhaps more in folklore than the actual historical record detailing Joan’s deeds. Despite the medieval documentation we have detailing Joan’s post-Domremy life and her death, DeMille and screenwriter Jeannie MacPherson consulted only the Encyclopedia Britannica and biographies of Charles VII and Louis XI, as attested in the screenplay’s margins. The main source that served as inspiration for Joan the Womanwas Friedrich Schiller’s 1801 play Maid of Orleans, in which Joan of Arc refrains from killing an English soldier when she falls in love with him. DeMille and MacPherson took Schiller’s soldier as inspiration for their character Eric Trent.

Without question, the inclusion of Trent is the most egregious departure from the story of the historical Joan. Not only is there no evidence that Joan of Arc had taken an English lover, but the very inclusion of Trent undermines Joan’s standing as France’s virgin-warrior patron saint. DeMille’s use for Trent likely served two purposes, both indicative of the mores and circumstances of the film’s date of release. The first is that Trent mitigated the blow to not-quite-dead Victorian sensibilities of having a woman lead men into battle. As a matter of fact, DeMille makes it quite clear that his Joan is shaming men into fighting for France by directly challenging their masculinity. Trent anchors Joan closer to the domestic sphere; were it not for Saint Michael’s directive to fight for Charles VII, Joan would have liked nothing better than to run away with Trent. The second reason is the First World War. By the time the film was released in the United States, the war had been raging for two years, leaving many millions dead. Releasing a film about the English occupation of France at a time when French and English men were fighting side-by-side was not feasible for the politics of wartime. By inspiring Trent to destroy the German trench, DeMille’s Joan demonstrates that old grievances are dead in the face of a new enemy.

Ultimately, and despite the film’s title, Joan as a woman is left wholly unexplored. Rather than highlighting how Joan was a woman who defied the gender norms of the middle ages and of the time in which the film was released, she is used instead to reinforce the importance of women’s place on the home front in support of fighting men. Given her use in even American propaganda during the First World War, this image of Joan would not have been out of place for audiences at the time. In the film, Joan was a woman who did not stray beyond the expectations of her gender, made clear by an early title card: “Founded on the Life of Joan of Arc, the Girl Patriot, Who Fought with Men, Was Loved by Men and Killed by Men—Yet Withal Retained the Heart of a Woman.” 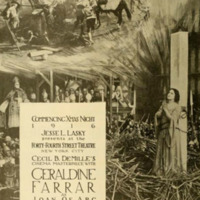