Are you looking for an eye-catching, dramatic, gripping story of arguably the most famous monarch in English history?  Then look no further than Elizabeth. Released in 1998 and directed by well-known Bollywood director Shekhar Kapur, Elizabeth was an extremely popular and critically acclaimed movie when it was released. It did well with audiences, posting $82.1 million in box office receipts worldwide against a $30 million budget, and holds an 86% on Rotten Tomatoes. Film critic Roger Ebert says, “As seen through the fresh eyes of an Indian director, Shekhar Kapur, Elizabeth is not a light Masterpiece Theater production but one steeped in rich, saturated colors and emotions.” And many other esteemed critics agreed with Ebert. Elizabeth was nominated for seven Academy Awards, including Best Picture and Best Actress, and it took home the award for Best Makeup. It also won awards at the Golden Globes and the BAFTAs.

The plot of the movie follows Elizabeth (Cate Blanchett) as she assumes England’s throne after the violent reign of her Catholic sister Mary Tudor (Kathy Burke). We see young Elizabeth, who is a Protestant, struggling to make decisions as the new Queen. She must reckon with the opinions of those in her government and the church, including those of her councilor William Cecil (Richard Attenborough), the Duke of Norfolk (Christopher Eccleston), and her adviser and bodyguard, Francis Walsingham (Geoffrey Rush). And all the while, she is under pressure to marry and produce an heir. This talk of marriage threatens her long-standing, intimate relationship with Robert Dudley (Joseph Fiennes). As Elizabeth learns to trust herself more, politically and emotionally, we see her story and strength culminate in the violent climax, which is the assassination plot against her. There are members of her court who try to remove her from the throne, including the Duke of Norfolk and even Robert Dudley, but they are both thwarted. In the end, we see Elizabeth shed her youthful beauty and recognize her own power. She utters the famous line, “Observe, I am married to England.”

Is there ever a perfectly accurate historical film? No, and Elizabeth is no exception. There are a few glaring inaccuracies in this movie. The first, and perhaps the most unforgivable, is that certain events that are depicted in the movie as happening within the first five years of her reign actually occurred over the course of her forty-year reign. Sometimes events have to be streamlined for a movie, but this kind of time line is misleading. Other inaccuracies include the death of Mary de Guise, who died of natural causes and was not murdered by Walsingham. William Cecil was not made to retire as the movie depicts; in fact, he served Elizabeth for almost her entire reign (up until he died). Elizabeth maintained that she was a virgin all her life. While we may never have any way of actually knowing whether the real Elizabeth remained a virgin, the movie depicts a sex scene involving Elizabeth and Dudley. There are many other historical inaccuracies, but as Kapur had said, “I had to make a choice: whether I wanted the details of history or the emotions and essence of history to prevail.” He is saying that despite the historical and factual inaccuracies, he believes that he has presented the essence of Elizabeth’s life.

Despite these inaccuracies, however, much of the film is echoes true events.  Firstly, all the major characters in the film are based on real people, even if their plot lines were fictionalized. And many of the events in the story are based on documented events that happened during Elizabeth’s lifetime. For example, in the movie, Elizabeth says to Sir William “I may be a woman, but if I choose I have the heart of a man!” This is actually a quote taken from her famous speech at Camp Tilbury, where she rallied the English troops against the Spanish forces decades into her reign. And the intimate relationship between Dudley and the Queen was certainly real. Although the movie portrayed it as a sexual relationship, most of the primary sources of this period do state that he was a favorite of the Queen’s, and her close friend. Some scholars imply there was a sexual or romantic relationship, but there is no concrete evidence to prove this.

In the end, I found this movie captivating and visually gorgeous. It certainly wasn’t difficult to sit through for two hours. The historical inaccuracies, while bothersome, didn’t ruin the movie for me. Cate Blanchet plays a wonderful Elizabeth; strong, romantic, feminine, and powerful. Blanchet had to elevate the character of Elizabeth as she was written, as I thought it was unfair to center so much of the movie’s tensions on the “did she, did she not” question regarding her virginity. We will never actually know whether Queen Elizabeth really did or didn’t have sex, but what does it matter? Her politics and reputation as a stateswoman far outshine her sexuality in history, and perhaps it should have in the film as well. She knew what kind of danger having extramarital sex would put her in, so why would she even bother with having sex outside wedlock? While there are glaring inaccuracies and some questionable story choices, I think Elizabeth plays an important role in historical film—reminding us how amazing Queen Elizabeth really was and how talented Cate Blanchet still is. 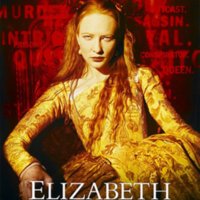