First Knight, released in 1995, is certainly still an interesting movie despite its poor reviews. From its unique focus on a side plot of Arthurian legend stems a broader conversation on how modern society perceives notions of medieval harmony, love, and gender expectations.

In speaking to its uniqueness, I must point to the differences between First Knight and the film Excalibur, as well as two movies that had relatively recent wide releases: King Arthur (2004) and King Arthur: Legend of the Sword (2017). The glaring difference between all four is that First Knight is the only one to not focus on Arthur as the main character, but instead places Lancelot in the limelight. The other major difference, especially when compared to Excalibur, is that Excalibur closely emulates the mythical and magical aspects of Arthurian legend, while First Knight eschews all reference to create a wholly pseudo-historical version. It is not alone in this kind of edit, as the 2004 King Arthur also rids itself of any fantastical plot points; however, First Knight is unique in that, in all other aspects of the tale, it follows the original sources, whereas the other movie deviates greatly.

First Knight draws mostly from Chrétien de Troyes’ Lancelot or the Knight of the Cart. The story focuses on Lancelot’s transformation from a simple swordsman to a Knight of the Round Table, of which the great conflict and action revolve around his illicit love for Guinevere, King Arthur’s wife. Malagant is the main antagonist, who, in my opinion, serves more as a device to prove Lancelot’s prowess as a knight and capability of protecting his ladylove, rather than holding actual plot importance as a villain. Arthur also takes a backseat in this movie, functioning as the obstacle between the two lovers. First Knight also draws from Thomas Malory’s Le Morte d’Arthur in that, cinematically speaking, de Troyes’ storyline ends rather flatly, so to make a more exciting story arc the producers decided to borrow the ending of Malory’s work. Arthur’s discovery of the affair between Guinevere and Lancelot, as well as his death, lends a sense of completion to the story told in First Knight. In addition de Troyes’ Malagant is blended with Malory’s king-killing villain Mordred; thus, after the final battle where Lancelot slays Malagant but comes too late to save his king, a dying Arthur gives his blessing to Lancelot to pursue a relationship with Guinevere.

This sounds especially sweet to modern audiences who see the then 65-year-old Sean Connery (King Arthur) as an inappropriate match for the then 30-year-old Julia Ormond (Guinevere). As the only Arthurian movie to have this age gap one has to think this was deliberate. It makes Guinevere’s attraction to Lancelot and eventual infidelity to Arthur much more understandable. Trapped in a political marriage, Guinevere is seduced by the amorous Lancelot and feels “true love” for him; the age gap between Connery and Ormond and, presumably, the characters makes Guinevere a sympathetic character. But is this age gap “accurate”? While it is strange that Guinevere, who is 25 to 30 years old in First Knight, is unmarried at the beginning of the film (and chooses her own spouse) what might be stranger still is the extreme age gap between Arthur and Guinevere. Carefully arranged marriage engagements began as early as in infancy for the upper echelons of society, and it would have been unlikely that a noblewoman like Guinevere would have remained unmarried for so long.

And now, of love outside marriage in medieval times. With the more rigorously applied standard of clerical chastity emerging at the time of de Troyes’ writing, also came the standard of the monogamous, indissoluble marriage that we associate with Christianity. But that does not mean that extramarital affairs went away; instead, they took on an epic life of their own as seen in the story of the love between Lancelot and his queen, Guinevere. This kind of passion is referred to today as “courtly love,” a term coined by French medievalist Gaston Paris in 1883 to describe the illicit love between a knight and a lady. At the center of the affair is the Lady, put on a pedestal and practically worshipped by the Knight, who gives over his life in chivalrous service to her. The Lady, however, is aloof, distant, and rejects the Knight’s amorous advances, at least in the beginning. This preserves her station as a dignified woman of Christ while still allowing for her objectification. When she “gives in,” she must in some way atone and be redeemed by the men or the Church to become pure once more. We see this when Guinevere rejects Lancelot twice before admitting her love for him, all the while he follows her to Camelot and pledges his whole life to her. They are immediately caught by Arthur upon attempting to consummate their relationship, and almost die by Arthur’s own law. Only after the king’s blessing and Lancelot saving Camelot are they absolved.

As a prime example of Arthuriana, First Knight does a lot to play in to the genre. Described by medieval literary critic Susan Aronstein as an “Arthurian chronicle,” she points out that many, if not all, of these Arthurian movies were made around times of political or social upheaval. Much like the original Arthurian writers who were influenced by the politics of their day, Hollywood has produced cinema Arthuriana at times of conflict as a way of expressing nostalgia for an idealized past. Specifically, in the case of First Knight as an “Arthurian chronicle,” it hearkens heavily back to ideal notions of masculinity and femininity as well as an ideal kingdom. In post-Cold War, pre-9/11 America, this movie frames male chivalric virtues and strength in a time of peace, while also alluding to America as the New Camelot. I would go so far as to argue that even the courtly love plays strongly into modern culture - a culture that encourages female aloofness amidst conflicting messages of “be sexy, but not too sexy” and the relentless objectification of women.

All in all, the movie was… meh. 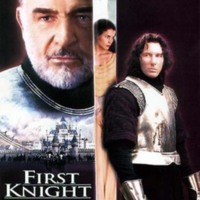