Unlike the Python Crew’s first film, which was a compilation of sketches from their television series, Monty Python and the Holy Grail drew on completely fresh material.  Eric Idle would later go on and use it as the basis for the musical Spamalot in later years.  Starring the typical Monty Python cast of Graham Chapman as Arthur, King of the Britons, John Cleese as Sir Lancelot the Brave, Terry Gilliam as King Arthur’s servant Patsy, Eric Idle as Sir Robin the Not-Quite-So-Brave-as-Sir-Lancelot, Terry Jones as Sir Bedevere the Wise, and Michael Palin as Sir Galahad the Pure, as well as many of the actors playing extra roles when needed. It was co-directed by Terry Gilliam and Terry Jones and was produced by Columbia Pictures.  Monty Python and the Holy Grail is an original take on the popular myth of King Arthur’s quest to recover the Holy Grail, and was the first comedic take on King Arthur to be put on the silver screen.  No part of this movie is historically “accurate,” but it makes for an entertaining film nonetheless.  The opening credits set the film in 932 A.D.  Monty Python and the Holy Grail treats the issues of gender in the classic Python fashion.  The treatment of gender in Monty Python and the Holy Grailis focused around the three stereotypes that has come to signify “medieval” women: the witch, the seductress, and the damsel in distress.

In the first act we encounter the witch.  While Arthur is looking for knights to join him in a small town, an angry mob attempts to burn a woman (Connie Booth) whom they claim is a witch, even dressing her to look the part in a ratty cloak, phony nose, and tin strainer for a pointy hat.  Despite the woman saying that she is not a witch and even the mob’s admission that they dressed her to look the part, her word is not given consideration and she is dragged off to be burned after the mob uses flawed logic to “prove” she is a witch.  The intention of this scene is to poke fun at the capabilities of medieval logic and reasoning, claiming that if a woman weighs the same as a duck then she is a witch, but at the same time gives us an idea of how easy it was to forfeit a woman’s life based on charges of heresy. The belief that the use of magic was a female quality became increasingly popularized after the publication of the Malleus Maleficarum (“Hammer of Witches”) in the late fifteenth century (O’Pry-Reynolds).

In the second act, we encounter the seductress.  While on his quest for the Grail, Sir Galahad the Pure encounters a castle that has the shining image of the Holy Grail floating above it.  He enters to find it is inhabited by one hundred and fifty young women “between the ages of sixteen and nineteen-and-a-half,” led by a pair of identical twins named Zoot and Dingo (Carol Cleveland).  The women in the castle all seem eager to tempt Galahad into carnal acts such as “spanking…and then the oral sex!” despite his desire to remain chaste.  The scene is funny because it is a reversal of the more modern stereotype of men tempting women into sex, and designed to throw the audience off guard with the sudden reversal.  When Sir Lancelot storms the castle to “rescue” Galahad, he is adamant about staying and “fighting back,” protesting Lancelot’s rescue.  The scene closes with Galahad accusing Lancelot of being homosexual for not letting him return to “do battle” with the ladies, to which Lancelot denies in a confused manner.  Women as objects of temptation is also a key part of the real myth of the Holy Grail. In Sir Gawain and the Green Knight (part of the Lancelot Graal), the Green Knight, Lord Bertilak, sends his wife Lady Bertilak to tempt Sir Gawain with sexual advances (Barron).  Gawain is uncomfortable with the situation, and when he turns her down, she disobeys him and stays in his room.  Gawain sputters and loses control of the situation, eventually succumbing to temptation and accepting gifts from Lady Bertilak, putting him in her debt.  This reversal of gender roles seen in Sir Gawain and the Green Knight is important to consider when we look at the scene with Sir Galahad in Monty Python, as it is the same clear reversal of the stereotypical gender roles (Spangler).

Later, in the second act, we encounter the damsel in distress.  Sir Lancelot is traveling through the forest when an arrow strikes his squire Concorde (Eric Idle).  Tied to the arrow is a note saying the writer is being held by their father in a tower and is going to be forced to marry against their will.  Lancelot assumes the writer is a woman and then draws his sword and storms the castle, fighting to the top of the tower and breaks into the room where the letter was written.  He kneels before the writer in a very chivalrous manner, until he realizes that the person who wrote the letter is an effeminate man named Herbert (Terry Jones), to whom he apologizes for barging in. Herbert’s father, the King of Swamp Castle (Michael Palin) barges in and demands to know what is going on. Lancelot apologizes and explains he thought Herbert was a woman, to which the king admits that he understands why Lancelot would assume this in a very embarrassed fashion, indicating he is ashamed of his son acting so much like a woman.  Brave knights saving helpless women has been a staple in medieval lore, from the legend of Saint George and the Dragon to the King Arthur myths. In said myths, Sir Lancelot did more than his fair share of rescuing helpless maidens from cruel fates, but none was more notable than his rescue of Queen Guinevere herself in the story Le Chevalier de la Charrette, which is also the first text to showcase the love affair between Lancelot and the Queen.  The Queen was abducted by an evil knight known as Méléagant and Lancelot undertakes a great quest to retrieve her, risking his life and honor several times for her sake.  While the scale of Lancelot’s adventure in Monty Python and the Holy Grail is not on the same level as Le Chevalier de la Charrette,“the damsel in distress, the chaste maid, good wife, and lady of the manor all provide a good reason for a hero to be heroic” (O’Pry-Reynolds).  It makes for an entertaining and, in the case of the Python crew, a rather humorous story as well.

Monty Python and the Holy Grail is not a film that teaches us much about medieval culture, but one that does tell about British social change and concerns of the 1970s.  The 1970s in England was a time of and political and social unrest.  The movie is essential a slapstick piecemeal of scenes that have political undertones.

O’Pry-Reynolds, Anita Kay. "Men and Women as Represented in Medieval Literature and Society." Saber and Scroll 2, no. 2 (2013): Article 6.

The author of the passage is Walther Map, also known by his French name Gautier Map, a Welshman born in England circa 1140.  He was a notable clergyman and writer and wrote histories in Latin.  The passage above tells the story of how Sir Galahad was…

Knights of the Round Table (c. 1475), from Bibliothèque Nationale de France 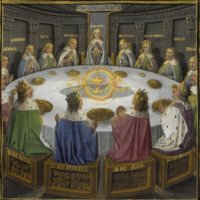 In this manuscript image made for Jacques d'Armagnac, the Knights of the Round Table are gathered at their seats to celebrate the Pentecost when they all have a vision of the Grail being held by two angels at the center of the table. 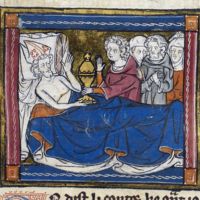 This manuscript illumination from the Estoire del Saint Graal shows Joseph’s last act of entrusting the Holy Grail containing the blood of Jesus Christ to his nephew, Alain, to keep it safe and bring the Grail to England. 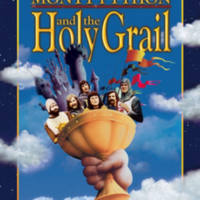