Two Portuguese Jesuit missionaries travel to seventeenth-century Japan on a dangerous journey to find their mentor, who is rumored to be an apostate.

Silence, directed by Martin Scorsese and written by Jay Cocks, was released by Paramount Pictures, in association with Fábrica de Cine and AI Film, in a limited run on December 23, 2016; it then expanded to all theatres on January 13, 2017. Silence is mainly based on a novel with the same title written by Sushaku Endo in 1966. Endo was Christian himself and was likely attracted to the Christian themes inherent to a story about Catholic missionaries in Japan. While the film takes place in the seventeenth century, making it a post-medieval rather than a “medieval” story, it is relevant to the study of cinematic medievalism because of its depiction of the Jesuits as a religious order, the Japanese who live in a similar fashion to medieval peasants, and Christian practice in a pre-modern setting.

The Jesuit order is shown to be sympathetic to the cause of the Japanese Christians as they attempt to spread their faith. In the film, Fr. Sebastian Rodrigues (Andrew Garfield) and Fr. Francisco Garupe (Adam Driver) discreetly enter the country and preform Christian services and administer the sacraments in private to the Japanese Christians. Before their arrival these Christians were suffering because they could not receive communion or mass and could not confess their sins. The Jesuit presence becomes a great source of happiness and relief for these people, who are suffering because their faith has been outlawed. One example of a Jesuit interaction with the Japanese is when Rodrigues travels to a village called Goto. There he believes himself to be part of this Christian community where he distributes “tangible signs of faith,” such as crucifixes, metal emblems, and even distributes the individual beads on his rosary.  This is significant because it portrays the change in mindset that the meeting of these suffering people has caused in Rodrigues. At first, his mission was to find the truth of Fr. Ferreira’s (Liam Neeson) apostasy, but now he has become devoted to the population, although he still seeks to find information about his mentor. Rodrigues’ mindset seems to change in the film, he ponders why it is that these people were meant to suffer and because of this they are as strong and as true, if not more so, than any other Christian. This is an example of “practical theodicy,” or having a strong will and endurance in the face of oppression, as the Japanese Christians are able to maintain their faith (DeWeese-Boyd, 2-3). This “practical theodicy” can also be seen when multiple Japanese Christians give their lives up, or willingly martyr themselves, because they are unwilling to denounce their faith, which is mirrored later when Rodrigues is persecuted. Another example of this change in perspective is when Rodrigues tells the Japanese Christians, who are in mortal danger, to trample on the Christian image to save their lives; this is a testament to how he cares for them, but also that the Japanese are more resilient than he anticipates.

The Japanese Christians, as a group, are framed in this story as having to endure an undue amount of suffering, but who continue to persevere. Rodrigues continues to explain that he cannot comprehend how these people are strengthening him and that they can endure so much suffering (DeWeese-Boyd, 9). He even goes so far to say, “These people are the most devoted of God’s creatures on Earth.” The question this raises for him is: why is there so much suffering? What reason does God have to cause suffering among the faithful? The film is attempting to portray these people as unwaveringly devout despite their relative naivety when it comes to Christianity. However, their understanding is not what Scorsese was attempting to emphasize, he wants to make it known that the Japanese Christians are devout and have faith, which can withstand much suffering. We might see here some parallels to how medieval peasantry have been depicted in previous films, especially in terms of their suffering. For example, in The Adventures of Robin Hood (1938), peasants are good people who are suffering at the hands of the more powerful, and therefore, that film argues, they deserve protection. Both films acknowledge and recognize how peasants can suffer at the hands of people more powerful than they. Another film that illustrates medieval peasant life that may shed light on their depiction in Silence is The Return of Martin Guerre (1982), in which peasant life is seen as grueling. The Japanese Christians have a similar position: they live in humble abodes, have hard lives, are oppressed by those who are more powerful, though they find solace in Christianity and in family life.

The biggest hurdle in attempting to spread Christianity in Japan is getting the Japanese to understand (and tolerate) the religion. Japan and medieval Europe were vastly different cultures with vastly different worldviews. In Japan if one lives up to his or her societal obligations then he or she cannot be a sinner, but in Christian Europe, accepting oneself (and performing penance) as a sinner is crucial to salvation (Hiramatsu). The difficulty of communicating the idea of sin may also originate with the difference in languages, as the word tsumi means both “crime” and “sin” in Japanese, which may have confused many (Hiramatsu). Overall, these differences may have presented obstacles for some in understanding Christianity. These issues can be seen in the film at multiple points, especially when the film shows the Japanese people not being fully clear on the specific details of the religion. During a baptism, Fr. Garupe corrects a Japanese mother, who does not understand the concept of God’s presence in heaven and Christians’ eventual place there. Later, Fr. Rodrigues wonders if the people care more for the religious (and mainly, symbolic) tokens than their actual faith. Despite this, the film seems to argue that the lack of complete understanding is inconsequential to the fact that the Japanese still persevere to keep their faith. A show of faith, for the Japanese Christians in this film as well as for medieval Christians, was the ability to receive the sacraments. They cannot receive the sacraments, especially mass and confession, without priests and thus are comforted when the Jesuits arrive.

Though Silence takes place around 1640, it emphasizes many aspects of the medieval world as seen on film. First, the Jesuit Order is prominently featured, spreading the Christian faith similarly to how in other medieval films religious orders are instrumental to the conversion of “heathens” to Christianity. Second, the Japanese Christians are very strong and endure much in their faith similar to the suffering and oppression of medieval peasants shown in other medieval films. Finally, even though the Japanese Christians in this film may lack a comprehensive understanding of Christianity, their faith is still equally enduring, despite many challenges.

Based on the novel by Shusaku Endo, Silence (1966)

The 26 Martyrs of Japan at Nagasaki (early 17th century) 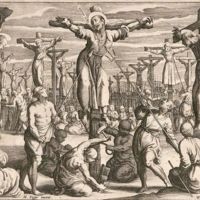 This engraving depicts the 26 martyrs, the Christian missionaries who were executed for not leaving Japan after the decree of the Japanese government. This spectacle is portrayed at the start of Martin Scorsese's Silence. These missionaries refused… 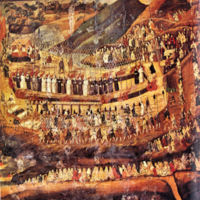 These sources are excerpts from decrees issued by the Japanese government; they are attempting to reduce the effect and influence of Catholicism in Japan. The Japanese Emperor Hideyoshi issued them both in the year 1587. They aim to minimize the… 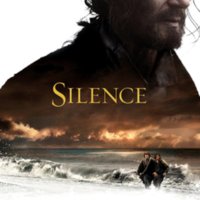 Martin Scorsese’s Silence is a historical epic based on the 1966 book of the same name by Shusaku Endo. The main character is Sebastiao Rodrigues who details, through letters and narration, the persecution of Japanese Christian converts by the…
View all 4 items