A pseudo-historical film exploring the fictional idea that Romulus Augustus, considered to be the last Roman Emperor in the West, left Italy after he was deposed and traveled to Britain, where he became known as Uther Pendragon.

The Last Legion (2007), directed by Doug Lefler, is a pseudo-historical, action-adventure movie that is set in the waning Roman Empire in the West and at the beginning of the early medieval period in Britain. Produced by the Dino De Laurentiis Production Company and loosely based on an Italian novel of the same name, this film depicts Romulus Augustus (Thomas Sangster), the last emperor in the West, escaping confinement after his deposition and becoming Uther Pendragon, thereby providing a Roman background to Arthurian legend. A young boy, Romulus Augustus is escorted by Roman soldiers, led by Aurelius (Colin Firth) and accompanied by the druid Ambrosinus (Ben Kingsley) and Mira (Aishwarya Rai), an Indian warrior, to Britain, where they might join with the last loyal Roman legion. Finding that the legion has abandoned its post and gone “native,” the group discovers that the island has slowly fallen under the control of Vortgyn (Harry Van Gorkum), who joins forces with a Goth (Kevin McKidd), who has pursued Romulus across Europe. In a final battle by Hadrian’s Wall, the formerly-Roman forces defeat Vortgyn and his allies, freeing the British people and allowing Romulus to rule under the name Uther Pendragon. While the film takes place in a specific period, King Arthur stories are questionably historical at best. While the film tends to focus on various battle scenes, Mira and Romulus provide an interesting commentary regarding the depiction of stereotypical gender roles—even when they end up in relationships that reassert gender norms, the specific portrayal of that relationship actually makes the characters feel more unique.

Mira, the main female character, is introduced as a silent warrior with a helmet, assumed to be male. The first thing she does is help Aurelius rescue his men, and she single-handedly defeats a number of warriors. She is revealed to be female when Aurelius stumbles upon her bathing, and immediately utilizes “weaponized femininity” in the next scene by using her beauty to distract a man long enough to knock him out. Towards the beginning of the film, she is “…charismatic and fast-thinking, but she is there to be looked at, not listened to…” (Bidisha). However, when she is told to remain behind by Aurelius (the first time they approach a battle after her gender is revealed), she forces them to listen to her—she successfully stages the attack and earns their respect. There are multiple scenes that show her taking down large numbers of warriors or soldiers on her own (and in one, the Roman soldiers watch her fight, mouths agape). Throughout the film, she is constantly shown as equally or even more competent and skilled than Aurelius and his men. Additionally, she comes to the rescue of Aurelius, not vice versa. In the final battle, when their relationship has been fairly well-established, they fight side by side on equal terms.

While Mira is a serious, stoic warrior during her introduction, she soon becomes softer and more contemplative—her budding romance with Aurelius is obviously a part of this, but more compelling is the understated maternal compassion Mira comes to feel for Romulus. It is rarely made explicit – the most prominent example is when, unsure, he takes her hand before entering a new place, despite having been assured by the men of the group that he was perfectly safe. There are no words exchanged between the two, and she spends several seconds staring at her hand after he leaves. The two rarely speak to one another, but hold meaningful eye contact often; in one scene, while other characters have a discussion in the background, the two of them sit in the foreground and Mira wordlessly shares her food. The connection between them is subtle but tangible, and their scenes are supposed to convey an emotional bond between them that can be characterized as maternal.

Typically, using a semi-maternal relationship to show another side to the warrior woman would be nothing new. Used to make the warrior appear more stereotypically feminine (and, often, more desirable), the maternal depiction turns the character into “…a complicated hybrid of femininity and masculinity, one that illustrates contemporary anxieties about strong women…who want to be equal to men on all playing fields” (Blanton, 93). As Blanton describes, a female warrior archetype is too intimidating, powerful, or independent to be desirable; thus, showing a softer, “feminine” side of the character that adheres to more stereotypical depictions of women can help make her more attractive. That said, I found the relationship between Mira and Romulus quite compelling. While it does depict a “softer” side of Mira, their relationship does not make her character seem more stereotypical; in fact, the emotional depth shown on Mira’s face serves to make the character feel unique. Although some films lend “depth” to a warrior by making her more stereotypically “feminine” to counter a more “masculine” attitude, Mira’s reactions to her quiet, understated relationship with Romulus give the character a deeper complexity. Perhaps this is because the maternal role does not seem to come naturally to her at all—most of her actions around Romulus are very hesitant and unsure, which differentiates them from the confident warrior she is shown to be.

The relationship Romulus has with Mira also helps show how he, unlike many young male protagonists, is not forced by the narrative to become a “masculine” hero, nor is he judged for failing to do so. A young boy turned emperor, he watches his parents die in front of him. Swept along by the adults in his life, not all of whom have the best intentions, he takes a passive role in the film. Although there are a few poignant scenes in which he steps up and takes control, they are notable becausethey are so rare. He is mostly content to trust the adults to lead him where he needs to go, and there is little pressure from the adult characters on Romulus to grow up faster. They are protecting him because he is the emperor (even after he is deposed), but they do not look to him for leadership because he is so young (although the real Romulus Augustulus, or Romulus the “little Augustus,” was 16 years old). As such, Romulus is rarely in combat, even after acquiring a legendary sword; he gives it to Aurelius to fight with it instead.

The fact that Romulus does not play an active (or stereotypically “masculine”) role in the film is actually reflective of Roman standards of gender. Men (that is to say, adult male citizens) were distinct from women, children, and slaves in social stature and importance (Williams 8). Even young male citizens were not “men” until they were of age and had gone through certain rites of passage, which closely tied social status was to sexual maturity. Men were those who could penetrate others—thus, “boys and women are represented almost exclusively as…receptacles” (Williams, 25). The fact that The Last Legion portrays Romulus in such a passive role is reflective of “masculinity” in the Roman perception. However, because modern gender norms do not always draw the same definitive lines between men and boys, Romulus’s role in the film is fairly in line with contemporary attitudes of his day. He is never judged for remaining passive—while the film could easily have made Romulus take up his legendary sword and lead the troops in the final battle, it allows him to remain behind without any of the characters questioning his decision to do so.  Additionally, in the scenes with Romulus and Mira, there is no sense of shame for him to seek her out as a maternal figure. Far from telling him to “be a man,” she indulges him and, according to the epilogue, ends up raising him. The depiction of both the untouchable female warrior as shamelessly yet hesitantly maternal, as well as the very young (and recently orphaned) male protagonist not idolizing and imitating his male protectors, but seeking out the female protector for quiet, subtle reassurance, is a departure from the usual tropes about gender in medieval film, especially in a film that is otherwise mostly action.

As a whole, the movie itself is a pseudo-historical action-adventure film that focuses more on the male warriors than this essay implies to be the case. While fairly entertaining, the most compelling part for me was the quiet relationship between Mira and Romulus. While the movie is historically questionable in terms of accuracy, it ties together many popular aspects of the late antique period, such as the “fall” of the Roman Empire, the story of King Arthur, and the mystery of the Ninth Legion.

Based on the novel by Valerio Massimo Manfredi, The Last Legion (2002) 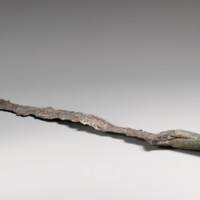 This sword, found in the Greek and Roman art collection of the Metropolitan Museum of Art, originates from the same culture and approximate period of The Last Legion’s version of Excalibur. The film combines Arthuriana and Roman history by positing… 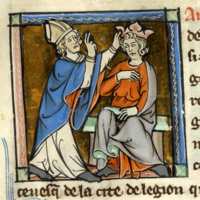 This image, from the fourteenth-century Abrégé des histoires divines found in the Pierpont Morgan Library, shows the coronation of King Arthur performed by a bishop. It is generally accepted that Arthur, though a popular literary figure, was not a… 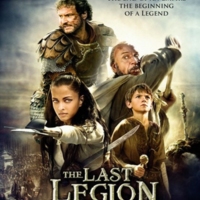 A pseudo-historical film exploring the fictional idea that Romulus Augustus, considered to be the last Roman Emperor in the West, left Italy after he was deposed and traveled to Britain, where he became known as Uther Pendragon.
View all 4 items