The Seventh Seal follows a returned Crusader knight, his squire, and a troupe of actors as they encounter violence, plague, and (literal) Death in medieval Sweden.

Ingmar Bergman’s The Seventh Seal (1957) is, more than anything, a meditation on death. Beyond the literal presence of Death himself (Bengt Ekerot), the film is steeped in death – from the constant threat of death through the plague to the implied violence and death of the Crusades. The film is set in medieval Sweden (Holland, 266) as plague sweeps through the country. Though no year is given in the film, we can easily situate the film because of what we know about the plague. This puts the film somewhere in the years 1347-1353 (Aberth 2010, xii), during the first major European outbreak of the plague. The Seventh Seal explores the various characters’ attitudes towards death and religion. Through the nihilism of Jöns (Gunnar Bjonstrand), the agnosticism of Antonius Block (Max von Sydow), and the fanaticism of the flagellants, we see a diverse set of highly religious responses to plague and death.

The most visceral religious response to the plague we see is through the flagellants, who are so fearful of death and the plague that they turn to self-inflicted violence as a form of public penance. Death is constantly on their minds. When they arrive in the nearby town, the leader of the flagellants accosts the townspeople by reminding them that death could come for them at any time. The flagellants represent a religious extreme – piety turned fanaticism. The musical cues underscoring their arrival and the frantic camerawork make them appear horrific, almost zombie-like. Bergman aimed to bring about revulsion for this extreme response to the plague, and thus implicitly condemned religious fanaticism as whole. Flagellants were, in fact a very real historical phenomenon. There were earlier flagellant movements in Italy in the thirteenth century (Aberth 2010, 135), but the movement spread in central Europe (including Austria, Hungary, and areas of present-day Germany) with the spread of the plague in 1348-1349 (Aberth 2010, 136). Unlike in the film, real historical flagellants included women and children, not just men (Aberth 2010, 139). There is evidence that flagellants were considered radical in their time, just as Bergman presents them as radical in the film. Indeed, in 1349, Pope Clement VI ordered the flagellants to be suppressed (Aberth 2010, 144) on account on their extremism. The flagellant movement, however, was mainly in continental Europe and thus would not have reached Sweden. Though their presence in the film ahistorical, the flagellants are supposed to highlight the extremity of medieval fanaticism in contrast to modernity.

The film’s exploration of religion also touches on another medieval response to crises of faith: the fear and persecution of witches. The character known only as Witch (Maud Hansson) is accused of having sex with the Devil, and is eventually burned at the stake. This, however, is somewhat anachronistic. While the persecution of witches did become widespread throughout late medieval Europe, it was not until the end of the fourteenth century that systematic investigation of suspected witches began (Aberth 2010, 188). The blaming of witches, then, would likely not have happened during the first plague outbreak of 1347-1353. But later witch trials could be connected to fears of plague (Aberth 2010, 189). The burning of the Witch also highlights the nihilism of Block’s squire, Jons. As the Witch is burned, Jöns remarks to Block that she sees merely “emptiness” instead of the Devil or God. In the finale, he reprimands Block for praying while facing Death, saying that “there’s no one to hear your cries or be moved by your suffering.” Jöns is the polar opposite of the flagellants; he truly believes in nothing.

Antonius Block, however, is essentially agnostic. In his mock confession to Death, he expresses his deep desire for “knowledge” about the existence of God. His inquiries indicate an apprehension toward his own lack of belief: “What will become of us who want to believe but cannot? And what of those who neither will nor can believe?” As his questions suggest, Block cannot simply believe; he craves more certainty. Block never finds that certainty (Holland, 269); he calls upon God for mercy in the final scene, but he is not spared. Given medieval attitudes toward heresy and apostasy, the modern attitudes of characters like Block and Jöns would not only have been outside the norm, but most likely non-existent in the Middle Ages. Most medieval European children would have been baptized in infancy (Evans, 35), and thus lived their whole lives as at least nominal Christians. While no doubt some people would have privately not believed or been “indifferent” to Christianity (Brooke and Brooke, 95), proclaiming it publicly is another thing entirely. In an era where Christianity was simply presumed (Evans, 16), Bergman uses the medieval setting to (anachronistically) comment on religion, human existence, and mortality.

Overall,The Seventh Sealpowerfully captures the immense gloom and apprehension of plague-ridden Europe, while simultaneously capturing the existential angst of the 1950s. The medieval setting is ideal for such commentary because it is “both very remote and very immediate” to modern audiences (Aberth 2003, 217). It becomes, in Bergman’s own words, “a modern poem, presented with medieval material” (Aberth 2003, 217). Yet despite this intent, the film also successfully captures the “apocalyptic fantasies and anticipations” (Aberth 2003, 224) of plague-ridden Europe. While Bergman’s religious themes are more truly indicative of the atmosphere of 1950s Europe after the devastating world war and as nuclear threats loom, the variety of responses by the characters, from fear to nihilism, do reflect the profound religious impact of plague on medieval Christians.

Aberth, John. From the Brink of the Apocalypse: Confronting Famine, War, Plague, and Death in the Later Middle Ages. New York: Routledge, 2010.

Based on the play by Ingmar Bergman, Trämålning (Wood Painting)

Letter from William Zouche, Archbishop of York, to his official at York (1348)

The significant widespread practice of public penance, seen in The Seventh Seal with the flagellants, is well-documented in medieval Europe. This 1348 letter, written by the Archbishop of York William Zouche to another official, reflects one of the… 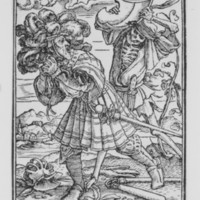 This sixteenth century woodcut shows a skeletal, personified Death pursuing the titular count. It was part of a series by Hans Holbein on the Dance of Death, in which Death strikes down men and women of all classes to be united in death. This idea… 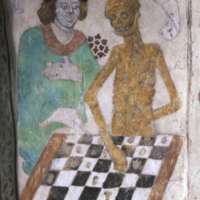 This large mural painting from the fifteenth century, originally in Taby Church in Stockholm, shows Death playing chess with a man, as he does in Bergman's The Seventh Seal. It was painted by Albertus Pictor, a famous late medieval artist (who is…

The Flagellants Arrive, from The Seventh Seal (1957) 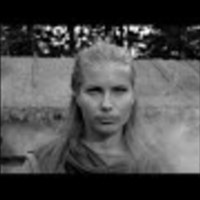 In this clip from Ingmar Bergman's The Seventh Seal (1957), a rural town in interrupted by the violent and frightful procession of flagellants -- wandering penitent Christians who believe the plague was sent by God, and that physical pain is the… 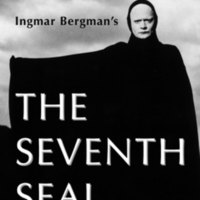 The Seventh Seal follows a returned Crusader knight, his squire, and a troupe of actors as they encounter violence, plague, and (literal) Death in medieval Sweden.
View all 5 items